I have had an interest in hedgehogs ever since I was a young boy living on the outskirts of London in the UK.

We had hedgehogs visiting our garden most evenings during the summer and for me it was magical to see a wild animal living so close.

If we had lived in the countryside then I might have expected it but as we lived in a built up area on the edge of a huge city it seemed all the more incredible to me. Obviously there were birds in the garden but somehow they didn’t capture my imagination the way hedgehogs did.

My interest in hedgehogs continued into adult life. Once I had my own home and garden I made sure it was as hedgehog friendly as possible. Ensuring that there was always water for them and some food too. I didn’t want to feed them too much as I also wanted them to eat the slugs and snails that used to decimate my vegetables!

One November, when walking my dog late at night, I came across a young hedgehog trying to find food near some bins. I knew it was too small to hibernate and survive the winter so I picked it up and took it home.

I made him a nest box from a cardboard box and put this inside a dog crate with dried leaves on the floor. I kept this in our conservatory which was warm, but more importantly never too cold during the winter to make the hedgehog start to hibernate.

I fed him every evening and cleaned out the crate once a week. I have to say, he was pretty smelly at times.

He kept growing and by the time April came he was about 10 times heaver than he was when I found him. So one evening I put his nest box in a safe place in the garden and by the next morning he was gone. He must have been one of the fittest hedgehogs in the area so must have had his pick of the local females!

That happened numerous times in following years, always in November when I was walking the dog. And each following April I released a big healthy hedgehog. My wife suggested putting cat litter in the crate in the following years and I have to say that worked a treat at stopping the smell.

My wife and I moved to the Canary Islands in 2013 so I suspected that would be the end of my hedgehog experiences. I was amazed when we moved into our house and I discovered a hedgehog in the garden one evening.

They are not native to the Canary Islands (well nothing actually is) so they must have been brought in at some stage.

I no longer have to take in baby hedgehogs for the winter as the temperature here never drops below 9ºC so wild European hedgehogs do not need to hibernate. My dog Oscar is fascinated my them and follows them around the garden at night, but never attacks them.

The biggest problem for the hedgehogs in my garden is that we have a swimming pool and they do fall in from time to time and cannot get out. I have rescued a few from the pool.

They are great swimmers but if they fell in early in the night they would be unable to swim long enough to survive. I have now made scamper mats at each end of the pool so that they can climb out. They seem to be working as I haven’t seen a hedgehog in the pool since.

Hopefully my lifelong fascination with hedgehogs will continue and this website is one of the ways of ensuring it does. 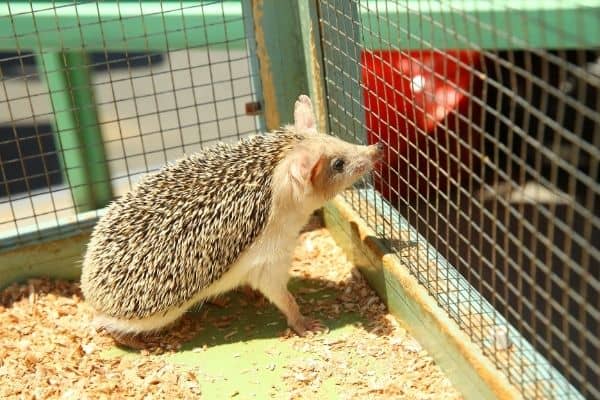 Can You Keep a Pet Hedgehog Outside?

Owning a pet can be quite special. By bringing an animal into their life, a person is signing up for a lifetime of love and joy, but with that comes plenty of responsibility for the animal’s welfare. It is possible to keep a pet hedgehog outside but this depends on the climate in the area… 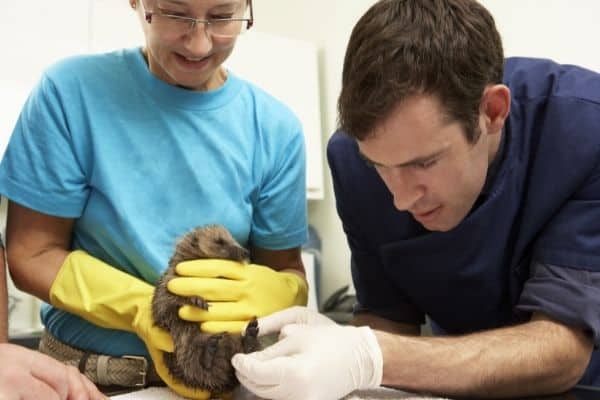 Do Hedgehogs Need Vaccines or Other Regular Veterinary Care?

Most caring new owners of pet hedgehogs, or potential owners, naturally will want to know do hedgehogs need shots or need any other regular treatments. Hedgehogs are not known to carry any diseases, such as rabies, nor are they susceptible to any diseases that are prevented by giving them shots or vaccinations. So there is…